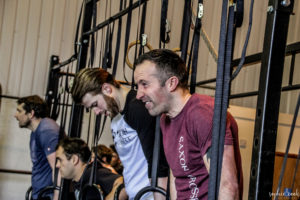 Going RX, or doing a workout as prescribed, is often a big step – the vast majority of people have to scale to some degree when they first start CrossFit. It can take a long time to acquire the level of skill, develop the work capacity and build the strength to go RX on a workout. Doing pull ups, using the heavier kettle bell, putting the load up on your barbell or hitting the fullest range of motion is tough going and can often be avoided for the wrong reasons.

The first issue with going RX – it will probably be hard. Making that jump from ring rows to pull ups is likely to suck. By the time you’re ready to hit pull ups mid-WOD the ring rows you are used to will have been the easy part of a workout. Unfortunately, the pull ups will now be the hard part. Whilst you used to think of kettle bell swings as a partial rest, jumping from the 24kg to the 32kg might just make them your least favourite bit of the session. But that’s all ok. Coasting with a scaled version because that what you’re used to wont pay off. Take the plunge, go RX and the rewards will speak for themselves.

Secondly – it will probably slow you down. Ripping through that 21-15-9 with the 12kg KB will give you a wicked fast time to put on the board but will most likely also leave you with the feeling of knowing you could have gone heavier. The key to fitness is power output and moving a larger load will ultimately mean you get fitter. Don’t worry too much about the time and soon you’ll be posting equally speedy scores with the 16kg!

Lastly, the main reason some people resist the RX, they don’t think their good enough. ‘I can’t lift that’, ‘I can’t do all those pull ups’, ‘I’ve never run that far before’ – all phrases I hear too often. As a coach, I would never ask an athlete to do something I didn’t think they were capable of – so if I recommend you go RX have a little faith in yourself and know that I think your capable of doing it. Most people are often surprised by what they can achieve if they just give themselves a chance!

So, next time you’re looking at the white board wondering how you should scale the workout just ask yourself, could I do this one RX?