Essential kit: Everything you need to know! 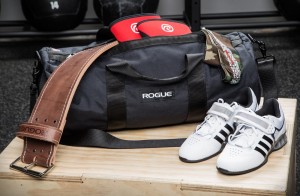 Ever wondered what is in the huge kit bags some people bring to the box? Feel like you’re missing out on a special piece of kit that will improve your Fran time? In this article we discuss the extra pieces of kit you might want to consider buying and what they will do to improve your fitness:

Wrist wraps are the thick velcro fastened strips you see people tying round their wrists. They are designed to prevent your wrist going into excessive extension under load during pressing movements. When working at or near maximal weights it can be beneficial to wear wrist wraps in order to minimize the risk of injury and prevent poor mechanics.

Wrist wraps are however one of the most over-used pieces of kit. They can be used to hide the mild wrist pain that comes with poor shoulder mobility and the small discomfort that comes from having weak wrist flexors. By limiting use of wrist wraps to purely heavy overhead lifting you will allow your wrists to become stronger and less reliant on the support of the wrap.

Olympic lifting shoes are designed to provide more ankle support, increased range of motion and greater force application during heavy lifting. Olympic lifting shoes usually have Velcro strapping in addition to laces in order to provide more support to the ankle during lifts. They also have a slightly elevated heel to allow the lifter increased range of motion around the ankle in the bottom position of a squat. Having a solid sole minimises the loss of force experienced during a lift.

Oly shoes can be used to assist us in squatting, thrusters, pistols and obviously the Olympic lifts. However it is also important to improve mobility and flexibility to allow these movements to be completed in normal shoes. Like most kit oly shoes can easily become something we rely on heavily to complete a movement.

Several members of box, including Coach Tim, wear knee sleeves for the majority of squatting movements. Made from neoprene they are designed to provide compression around the knee, increasing blood flow and keeping the knee warm. This in turn can ease mild pain and prevent future injury to the ligaments and tendons surround the joint.

If you experience pain free squatting then knee sleeves are most likely not necessary for you at this time. However as you squat more frequently and heavier loads one of the first things to protest are our knees! Getting in their early with knee sleeves can genuinely prevent little niggles later on!

Obviously we provide a variety of skipping ropes at the box for anyone and everyone to use. However your own rope will definitely shorten the time it takes you to learn double unders! Having a rope set to your specific height and arm length will mean you spend less time whipping yourself and more time getting some quality reps in. It will also eradicate the scramble to get your favourite rope from the hook when they are announced during class.

There are an infinite number of speed rope manufacturers who all claim to have the fastest/easiest rope ever made. It will take a little experimentation but there is a rope out there to suit to everyone and it will make skipping life easier.

Weightlifting belts are designed to increase the intra-abdominal pressure we create when bracing during heavy lifts. They provide a solid, unmoving surface for our abdominals to brace against allowing us to provide greater stabilisation to our midline. Belts do not support, protect or do anything for your lower back!

Weightlifting belts are often worn during squats, Olympic lifts and deadlifting. It is no coincidence that all top level strength athletes use belts and it is accepted that you can lift more weight when wearing one. However belts often create a false sense of security over the strength of our core and our ability to stabilise ourselves. They also often become something we rely heavily on during the majority of our lifts. Similarly to wrist straps they should only be worn when at or near maximal weights and even then only sometimes. Squatting without the belt will force your core to become stronger in the long run!

Lacrosse balls are small solid rubber balls used in the aid of restoring range of motion and easing muscle soreness. Used to self-massage muscles they are perfectly suited to target small trigger points around the body allowing increased range of motion through various movements.  They are also ideal to target specific areas of muscle soreness helping to relieve pain and stiffness. Plus they are extremely bouncy and therefore lots of fun!!!

Athletic tape can be used to avoid friction between your hands and the equipment. Used by gymnasts and Olympic weightlifters in equal quantity, it allows continual training without the risk of annoying rips and tears.

Wrapped round the thumb during Olympic lifting it can prevent pain associated with the hook grip.

Made into gymnastic grips it can prevent torn calluses during high rep gymnastic work.