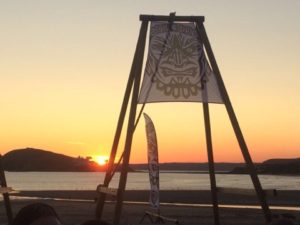 Last weekend the Saxon war wagon made it way to Bantham in Devon to throwdown with 1000 other CrossFitters at Tribal Clash 2017! Tribal is the largest team fitness event in Europe and is one of the most popular events on the UK scene – this year it was easy to see why.

For this week’s blog we take you through the epic-ness that is Tribal!

Arriving on Friday morning you can’t help but be impressed by the location. A huge sand beach on the Devon coast with shallow clear water stretching out into the bay. Rolling hills and rocky peaks surround the site and a small village sits just behind – we not sure they were prepped for the CrossFitters to descend! The competition arena is set up on the beach with huge wooden A-frames, sandbags, atlas stones, paddle boards and ropes all visible to the awaiting competitors. A huge vendor village sits just behind the arena with stalls, a bar, food vendors and the famous Tribal Tipi! A short walk away is the camp site – worthy of any decent festival!

The Friday is spent setting up, relaxing, exploring and waiting for the opening ceremony. We did all four. We found the local pub, we climbed the nearby hills and explored the rocky outcrops and pools – Coach Tim even smashed his nose in trying to do a handstand on the cliff top! We then listened as the workouts for the next day were announced!

Saturday saw us kick off with a 5 minute sprint WOD. In our team of 6 we had to carry a large slosh pipe – think large plastic log filled with water weighing about 50kg – around a mini assault course. The workout started with a rope swing check in, which we all nailed, then proceeded into two laps of up and over beams carrying the slosh pipe before heading back over the rope swing.

WOD 2 was an interval piece. In pairs the athletes had to get themselves over a wooden A-frame and then complete synchro atlas stone lifts – the guys maxing out at 77kg and the ladies 55kg. This was by far our favourite event of the weekend!

Next up was a stand up paddle board race which was absolutely epic! The majority of the team had never been on a paddle board before let alone a massive 6 person board! With zero practice, very little idea of technique but a whole lot of heart we managed to get half round way round before we fell off. On the halfway turn we got bumped by an unexpected wave which sent us all flying – somehow our sun glasses stayed on! We managed to scramble back on, no easy deal, and complete the event in just over the 7 minute cut-off!

The last event of day 1 was a pretty horrendous 5k trail run. Those beautiful rolling hills and lovely sand dunes suddenly became our worst enemies and we soon longed for the flat terrain of Norfolk! With several choke points along the route the run was a slight cluster fuck but it will remain a firm favourite – especially for Andy who was incredibly pleased to beat Tim on the run!

Over the Friday and Saturday the weather had been our buddy. It was gloriously sunny, the sea was calm and there wasn’t a cloud in the sky. Sunday was a slightly different picture. Torrential rain, savage wind and an incredibly choppy sea saw the summer atmosphere die and the survival atmosphere kick in! The crowds shrunk, the ponchos came out and the mud took over everything!

Still we carried on and took on WOD 5, a horrible couplet of squats and rope climbs. With a monstrous 240kg sandbag worm the team had to complete 25 clean, double squat and presses before hitting as many rope climbs as they could before the time cap – it got emotional! The rain and wind made this workout particularly hard, especially on the hands!

The last WOD before the cut-off saw the team take on another run, this time carrying the slosh pipe again, some over tyre burpees and then tyre shoulder to over heads. It got pretty emotional on the shoulders!

After WOD 6 the competition cuts to the top 32 teams which we sadly didn’t make. After short lived disappointment, we made our way to the local pub and quickly forgot all about sandbags and hill climbs thanks to the local Rattler cider!!

All in it was an amazing weekend with stunning scenery, great company, awesome support and a fantastic effort from the team. Everyone represented Saxon well, gave their all, cheered their heart out and pushed their limits. As a box we couldn’t have asked for more!