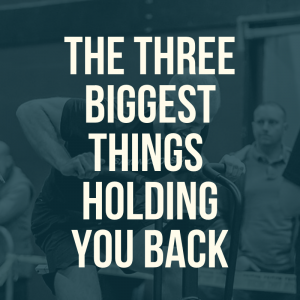 Should, could and would. I should have, I could have and I would have. These are the three biggest excuses we give ourselves. Whether we say them out loud or to ourselves in our head we use these words to let ourselves off the hook when we fall short of what we want or what we expect. They help us justify not being where we are capable of.

I should…. How many times have you heard yourself say this. When we say we should do something we are automatically making it into a task we don’t want to do. I should go to the gym, I should lift heavier, I should clean the house. Should is just negative self-talk that makes us doubt our commitment to doing the task at hand.

Imagine next time you are finishing work a little late and you are deciding whether or not to book out of that class. I should go to the gym will be your first thought. That should, however, is setting you up for a ‘but I wont because’ moment. Try ‘I want to go to the gym because…’. I guarantee you’ll turn up more.

Now there will be times in life when should, could and would will be useful and necessary but they are all very negative words to use. Imagine how more positive you would feel if you simply used want, can and will more instead. I want to do things, I can do things and I will do things is far more constructive than I should do things, I could do things or I would do things.

If you think positive you will be positive.