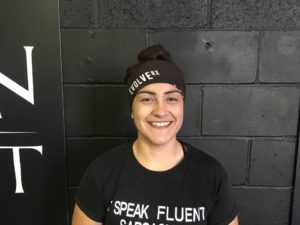 Over the last few months you’ve all seen Els become a part of the coaching team at Saxon. The journey from member to coach is a strange journey and one that gives you a unique perspective on what it is that makes CrossFit so awesome. For this week’s blog post we asked Els to share some of her thoughts on her first few months coaching at Saxon CrossFit:

‘When Tim asked me (I say asked, but it was more of a ‘Els you’re writing a blog post about how you’re finding coaching so far’ type statement) I didn’t have a clue what would come together. But none the less, like everything I have had to do so far with coaching, I jumped at the opportunity.

Ever since I started training at Saxon back in May last year I knew I wanted to coach. I instantly saw the passion, fun and variety in being a coach at Saxon CrossFit and knew that one day I would like to be a part of it all. Now one year later and I am learning from and working alongside some truly amazing coaches.

The transition isn’t an easy one from many perspectives. To go from listening to the white board to explaining the white board is a huge step and a massive change for both me and the other members. Whilst for me the change felt completely natural it definitely changed the way I viewed the community of Saxon and the way I felt I was viewed by them. Putting all the technical and scientific elements of coaching aside the social change was huge.

Firstly, I had to learn a million names, quickly. Having been a member I definitely took for granted the fact that the coaches know all our names, what we can lift, what injuries we’re nursing and just generally what’s going on in our lives. Now I would obviously talk to people in class as a member, share banter and have some cool conversations but it wasn’t until I started coaching I realised ‘shit, I never caught their name’. This might sound rude but I think its actually cause in the grand scheme of things as a fellow member your name doesn’t matter, just that you’re working hard and suffering alongside me in a workout. By the time you realise you didn’t catch a name you’re too deep in the nameless game to start trying to find out.

There was also the realisation of just how much work goes into coaching a class. The obvious stuff we see: going through the whiteboard, breaking down the movements, scaling the workouts for people and giving out pointers is just the surface. You have to constantly be switched on to what every person in the room is doing. Are they moving well, are they being safe, are they pushing themselves enough or are they pushing themselves too much, are they having fun.

Then there’s time keeping. Getting 14 adults to start and finish something on time is considerably harder that it sounds – especially when everyone, the coaches included, are such chatter boxes!

On top of this the logistics and layout of a class takes a lot more thought than I had realised. Making sure everyone has the right amount of space, the right amount of kit and is happy with what their doing is a huge part of managing a class successfully.

As coaches we definitely love having a natter with you all, it’s the best thing about the community we have but what you all don’t see as a member is how many things we are thinking when we’re talking to you all. (This does not mean in the slightest that we aren’t interested in anything you guys have to say to us. The best part of my day is just getting the opportunity to shoot the shit with some of you and have a laugh.)

One of the biggest changes I have found in myself as a person since starting to coach is the ability to speak to absolutely anyone! I can genuinely say I have gained so much confidence in speaking to people I don’t know. I recently started a new job outside of CrossFit and found myself chatting to my new colleagues like I had known them for years and I instantly felt a part of the team. Previously I have found it’s taken a good few months to feel truly comfortable amongst a new group of people.

(One a side note I have actually found myself abusing this new found skill. I’ve become so conditioned to want to say hello and goodbye to people in the box, that I’ve started that trait in every other aspect of my life! I’ll be getting a coffee in a coffee shop and a stranger will leave and I’ll turn to say ‘see ya later buddy!’ They don’t know me and I don’t work there, massive fail!)

Now Tim said to keep it brief so I’ll end by saying I’ll be the first to admit I don’t know everything, I am always learning as I go on, (and I sure as hell can’t move like I’m made of rubber like Jess can). I am thankful though, to every single member so far for not making me doubt myself and for listening to any advice I give you as I learn. I hope this post has given everyone a peek behind the curtain to the magic show that is, coaching. Because it sure as hell isn’t as easy as it might appear. Trust me.

All I can promise for now is a pretty average level of banter and some unbelievable dance moves, in exchange for all of your patience as I continue to grow. Deal?