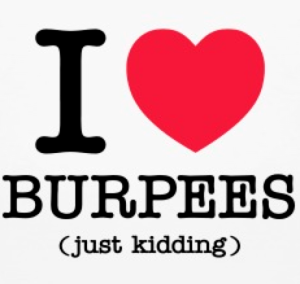 Fire blazing, shitty movie on, snuggled down on the sofa, tin of Quality Street open and the Baileys on ice? Sounds pretty sweet right. You’ve probably spent the day getting in the last bit of Christmas shopping, seeing family and friends, dropping off presents, eating your body weight in the special foods that only come out at Christmas?

Now at Saxon we do all of the above as well. And the fact that Christmas Eve has fallen on a Sunday means we will have even more time to chill out and relax and partake in the above. But all of this wont be until we have completed the oldest Saxon CrossFit tradition – 1 hour of burpees!

That’s right, 60 minutes of laying down and getting back up, surrounded by our community, music blaring and mince pies disappearing. A crowd of Saxon athletes getting in one last workout before the standard Christmas feast consumption begins.

But why? How did this start and why do we keep doing it?

It all started the year before Saxon CrossFit opened. Head coach Tim had seen a Youtube video of CrossFit legend Mikko Salo completing 1000 burpees for time. At the end of the video Mikko said it was the stupidest thing he’d ever done. Obviously this meant Tim had to try it and so the plan was set – Christmas Eve Tim was going out to the garage and was going to do 1000 burpees, sorted.

But life just ain’t that smooth. For various reasons, upon waking, Tim had just 1 hour until he had to be ready to do something on Christmas Eve. Rather than abandon the challenge Tim got straight to it, 60 minutes of burpees it was. No music, no crowd of fellow WOD’ers and no food or water (massive error). 60 minutes later, Tim was fucked, he’d done a shit load of burpees and he was getting ready for the day, disappointed that he hadn’t got anywhere near 1000!

Fast forward to the next December and Saxon CrossFit is open, thriving and full of people keen for fitness! Tim is determined to repeat his challenge and beat his previous score. He floats the idea with the coaching team who are keen to get involved, he speaks to some members who want in and then BOOM! Christmas Eve burpees is officially born. Every Christmas Eve the Saxon coaching team, joined by as many members as possible, hit 1 hour of burpees.

Now entering its 5th year of existence, Christmas Eve burpees is an epic event. No matter a persons ability or experience they can get involved and take on the challenge. We can scale, adapt and partition so that everyone can be part of the fun and get a serious workout in before Christmas ruins all their gains!!!

The coaching team are buzzing for another awesome event this year and look forward to seeing both burpee veterans and novices getting their sweat on together!