Rowing: Why we do it, why you should want to do it and how we will do it.

This week Saxon CrossFit took delivery of two new Concept2 Rowing machines bringing our fleet number to five.  The coaches are very excited about this and you should be too! With more rowers we now have greater scope with programming allowing us to build your engines even more and you will have to run less in the rain! We know rowing isn’t everyone’s favourite and some people will actively avoid a class in order to not row. Below is why you should embrace the rower, give it your all and learn to love the whir of its fan!

Rowing is a full body workout:

It uses pretty much every major muscle in the body including but not limited to: the lats, quads, hamstrings, glutes, abs, biceps and shoulders.

Rowing is an efficient calorie burner:

Lots of large muscles working hard and an increased heart rate make rowing metabolically challenging. Although our focus is never on calories burned you can’t ignore the fact that you would be hard pushed to burn this many calories doing any other activity in the same amount of time.

Rowing requires you to have a great gas tank and be able to apply force for long periods of time. It can be as challenging as you decide to make it by rowing faster or pulling harder. Working hard on the rowing machine will improve your cardiovascular health, your endurance, your strength, your lactate tolerance and your mental ability to suffer!

Aside from falling off the rower after giving your all in a 2K sprint its difficult to injure yourself. Rowing is super low impact and therefore incredibly easy on your joints. Its follows simple plains and ranges of motion and aside from some questionable rowing tekkers it is very hard to do wrong! It also allows pretty much any level of athlete to move through a large range of motion safely!

Everyone is doing it and everyone can’t be wrong:

We all know coach Tim loves a row. He rows pretty much everyday and considers it the main reason he has a good engine. But if Tim’s endorsement of rowing isn’t enough to convince you of its benefits then maybe Rich Froning, 4 x CrossFit Games Champion, Samantha Briggs, CrossFit Games Champion 2013 and Steven Fawcett, Fittest Man in Britain and First UK male to compete at the CrossFit Games can:

Rich Froning has recently released his ‘What is Rich doing’ programming, a daily breakdown of what he is doing and when. Looking at just one weeks programming see’s rowing including 5 times. Three times as stand alone rowing pieces and twice more in other met-cons.  Rich has reported rowing over a million meters in a year! Thats over 2,700m a day on average! Rich is renowned for his ability to pace workouts and maintain a level of intensity that other people just cant. He attributes this to the sheer volume of rowing intervals he does! 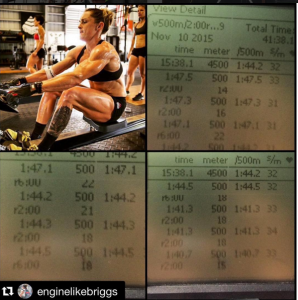 Samantha Briggs, the only UK female to make it to the CrossFit Games and the 2013 CrossFit Games Champion, is known as the engine! With a gas tank bigger than anyone else Samantha Briggs has been known to push her fellow male Games athletes on conditioning workouts! Its no coincidence that in her programming we again see lots of rowing intervals! And by lots I mean several times a week! 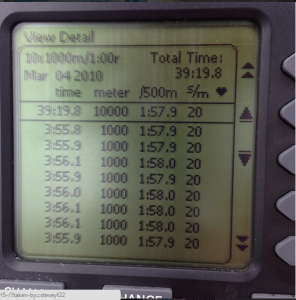 The best CrossFitter in the UK, Games athlete and one of the fittest men in Europe, Steve Fawcett, is also a huge fan of rowing both in his own training and his programming for JST Compete, an online workout program followed by coach Tim. Steve’s instagram is full of rowing screen shots and videos of him giving his all on the Concept2. Steve is also known for his huge engine and fantastic pacing ability demonstrated by his screen shot here.

Now we know the benefits of rowing and why it is so awesome we need to look at how we are going to implement it into our training. Just like every other workout we do our rowing will be varied. We will row short intervals, long repeats, long single distances and incorporate it into other metabolic conditioning pieces.

We will also look at our technique on the rower. Just a few adjustments here and there will see you getting a lot more from the machine and saving you valuable energy on the longer pieces. This will pay off nicely when next month we see what everyones 2K time is!

Hopefully this has highlighted the importance of rowing in your training, the reasons we do it and why we are going to do more of it. Remember if you always want to avoid doing something it probably means you need to practice it!