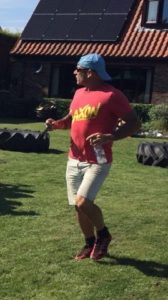 The coaching team are incredibly proud to name Rob Breen as our August Member of the Month!

Rob has quickly become a legend at Saxon. Phenomenally fit, nice as pie and funny as fuck Rob’s only downside is his horrendous fashion sense – no 50 year old should wear cut off denim shorts!

A true community player Rob has endeared himself to the coaching team over the last few months through a few key actions:

Rob participated, and performed awesomely, in the T800 Summer Series. Rob gave up his Friday evenings week in, week out to represent Saxon CrossFit and he did so with a smile, some banter and some serious displays of fitness.

Rob then organised, the now legendary, ‘Rob Breens Bootcamp’! Giving up several of his days Rob organised, planned, set up, directed and then cleaned up after an epic boot camp event for the Saxon community. The amount of work that went in to the day was clear to see and it provided an fantastic social event for the Saxon calendar! We are already looking forward to the next event!!!

What brought you to Saxon Crossfit?

I had been using Crossfit methodology in my own training for about 5 years prior to joining Saxon. I would train with mates at work in PT classes and mates outside of work experimenting with Crossfit movements and wod’s. Sadly my mates became old and couldn’t move any more, their zima frames would stop them from doing pull up’s and so I decided to find a younger crowd at Saxon who could do pull ups !!

What’s the biggest change Saxon Crossfit has had on your life?

Since joining Saxon I have become a good wrestler, I recently beat Tim one on one at the Johnson’s WWF event! Tim tried his best but his beard let him down! The biggest change Saxon Crossfit has had on my life is that Tim felt compelled to trim his beard in defeat !!

Whats your favourite thing about being a member at Saxon Crossfit?

Sharing my passion for fitness and competition with like minded people – except Dean, I just wanna mess up his perfect hair !!

In a workout you want to see ?

Any thing that includes lifting heavy shit! I also like to see Andy do burpees, he reminds me of the energiser bunny👍

What movement do you shed a little tear at during a wod?

I’m not a great lover of thrusters – at my age I have to be careful of not following through at the bottom of the movement !!

How would you describe Saxon Crossfit in 3 words?

Tell us about one thing about yourself the other members will not know ?

I’ve been training since I was 8 years old. My dad got me into sport and fitness and I passed this on to my son’s. When my son’s were young I decided to build a child’s bike seat for my mountain bike. I made this out of an old child’s high chair, my eldest son who was 6 at the time so I had to squeeze his bum into the seat, but I got him in
My youngest son who was 2 also needed something so I decided to turn an old Army rucksack into a carrier for him. I cut two holes for his legs and two holes for his arms and his head stuck out the top by the pull cord. I then proceeded to go mountain biking with my boys – one on my back and one squeezed into a chair that was to small for him!