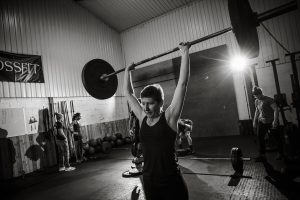 The Saxon Team are pleased to announce our October Member of the Month as Lindsey Imeson. Fresh off an epic performance at our last In-House Throwdown Lindsey used October to really show the coaching team what she is made of. Setting herself some big goals, pushing her weightlifting and aiming for those heavier loads in the metcons Lindsey is determined to strike whilst the iron is hot and push her limits even further.

Combine her awesome effort level with her consistently positive attitude and her thirst for knowledge and its easy to see why Lindsey has been nominated member of the month by the coaching team!

Its all Richard’s fault. He had been coming to Saxon for a couple of years and had kept telling me that I would love it. To be honest, when I saw how he looked when he came home sometimes, there was no way I thought I would give it a go, especially after he would describe the WOD, it sounded absolutely terrifying! But, a taster session came up so I agreed to try it. As frightened as I was about the whole thing, I signed up and that’s how it started for me.

There are a few I could mention but I think the most profound change is that it has changed how I feel what ‘fit and healthy’ looks like; especially in women. When I was a lot younger, I used to ‘micro-manage’ my diet in a constant effort to be ‘thin’, which I thought would make me happy, but in actual fact just made me tired and miserable, I can see now that I had an unhealthy relationship with food. Exercise and growing older started to change this perception for me, but now, seeing what my body is physically capable of never ceases to amaze me. Before CrossFit, I had never lifted a barbell in my life but now, surrounded by women looking strong, confident and capable is absolutely how I see what ‘fit and healthy’ is.

What’s your favourite thing about Saxon?

It’s Saxons! When you’re here, amongst everyone, all going through it together, it inspires you to give it your all. I love being part of this tribe.

Any long and grinding Emom or amrap that makes you dig deep!

Every Rep Counts (I fucking know! Stop telling me!)

Tell us something about you that the other members won’t know?