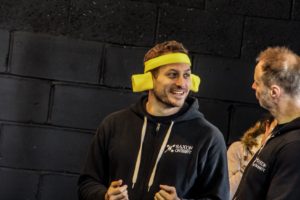 We are stoked to announce, slightly behind schedule, our April Member of the Month as Gav Ireland!

Joining us late last year Gav quickly settled into our community and became a part of our boxes culture. Consistent, hard working and fun Gav was an instant hit with the coaches and members alike – he is one funny dude!

Gav first demonstrated his member of the month potential when after only a few months with us he signed up for the CrossFit Open! He proceeded to bury himself in every WOD, driving deep outside of his comfort zone and testing his physical and mental limits.

Fast forward to the end of the Open and Gav has been on it. Reworking his schedule to get in extra sessions, following additional programming from Coach Tim to up his game in every aspect of CrossFit and pushing his boundaries in each and every session Gav has truly earn’t his Member of the Month mantle!

Combine his work ethic and desire to improve with his ease of coaching and his off the chart banter level and Gav becomes a great asset to the box and our community. Already signed up for some competitions in 2017 we can’t wait to see where Gav is in next years Open!

My ‘hairdresser’ car apparently…
…I played rugby for many a year and retired at 40 when I felt my ears were irreversibly beautified, proceeding to eat and drink at the same rate post rugby but without one shiny fuck given for the exercise part. Cue highly toned one pack, sleep pattern all over the shop, and baggy tshirts to cover the damage, not to mention getting out of breath during simple tasks and seizing up when sitting down for too long. Some scuba diving friends were doing Crossfit in Mexico, and a few of my old rugby team had done a session or two so I looked it up for shits and giggles. Came across the Crossfit Games which just happened to be kicking off at the time and was gob smacked at what I was seeing. Thought I would see what mere mortals could achieve so did some research. Having stared expectantly at gym equipment a number of times awaiting inspiration on what to do next, I was all for letting someone else plan the sessions, I needed something I could just turn up to without thinking, get done in reasonable time, and wouldn’t bore me so I would stick at it. Did the taster, booked the foundation, tore my calf sprinting with my fecking dog, the rest is history!

I can see all my junk without a mirror now…

Accepting I’ll never have a beard as good as Tims…

…Recognising my body is way more capable of keeping going than I ever thought possible… 1 hour of burpees was a rude awakening, but the count up after blew me away! Also, finding a great substitute for the camaraderie of rugby which I missed.

What’s your favourite thing about being a member at Saxon CrossFit?

The banter, the people, the community and the way we are together…I can have the shitiest day outside of the box, but in there you always end up laughing, sadistically looking forward to sharing that heinous 40 min AMRAP dredged up from the bowels of Tim’s mind that the previous group are being maimed with in front of your very eyes, questioning your life choices on the way back to the car as you wonder if your pounded limbs can operate the pedals and the steering wheel, warning people to ‘turn around whilst you still can’ and yet rocking up the next day to do it all again…cause it fucking works!

What movement do you shed a little tear at during a WOD?

Overhead Squats… functional movement…don’t get me started…would you like help lifting that box sir, certainly sir, let me snatch grip that mofo for you whilst dropping into a balls to the floor squat… I genuinely got on the tube in London within the first few months of training after a particularly disgusting squat session the previous day in such a bad way somebody actually offered me their seat..!

How would you describe Saxon CrossFit in three words?

‘Smiling every day’… and no, it’s not wind

…there was that one deadlift though.

Tell us one thing one about yourself the other members won’t know?

I played the lead role in the musical Me and My Girl (fuck off already Tim!)