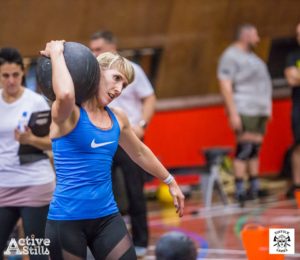 The Saxon coaching team thought it was clear who deserved our Member of the Month award for October – Becky Willett!!

Becky joined us in February this year and it’s safe to say, after a little coaxing, she has embraced CrossFit and is killing it!

A self confessed cardio addict Becky was already a relatively ‘fit’ person when she joined. Now, through her dedication and acceptance of varying training methods, Becky has become a well rounded, strong athlete. Whilst still keep her engine primed Becky has built up her gymnastics ability, now able to rep out strict pull ups like a boss, and got comfortable throwing some serious tin around on the barbell. The progress she has made with less than a year of CrossFit has been amazing and we can’t imagine what she be achieving by this time next year!

Given that she is absolutely nuts, Becky is an absolute pleasure to have in the classes. Suitably up for banter with the coaching team but still ready to knuckle down and put the work in Becky is somewhat known for never keeping still. If you don’t Becky just look out for the small lady living at 1000mph in the 7pm classes.

Despite making huge progress in recent months this is not the reason Becky got Member of the Month. Over the summer we managed to convince Becky to try her hand at competing and she stepped up as a replacement for one of the teams heading to the Suffolk Games. After absolutely smashing it Becky then threw her hat into the ring for the Suffolk Games pair comp last month and along with Chris put in some awesome performances! Becky then made her In-House debut at our Girls vs Girls comp a coupe of weeks ago! For someone not confident enough to compete we think shes doing wonders!!!

Keep up the awesome work Becky, we think you’re going to smash it!

What bought you to Saxon CrossFit?
I’ve always been into sport and fitness attending a gym, a running club and having weekly PT boxing sessions but I was feeling a bit bored with my usual routine and my PT sessions were getting expensive.
My sister had started at Saxon and loved it  – which was a total shock to me as back then Sammi used to be allergic to exercise and once broke out in a rash when I took her to the gym (not actually joking) – so I had to book in for an induction session just so I could witness her doing some sort of physical activity.

The biggest change is probably my outlook to training mentally.  I was a self confessed cardio addict who thought that the amount of miles I ran or the amount of time I spent on a spin bike or cross-trainer equalled how fit I was.  Crossfit and the coaches have changed my way of thinking and my approach to my fitness.  It was hard initially, especially not knowing what my training session was going to entail beforehand.  I used to feel like a 10 minute AMRAP wasn’t long enough or making me work hard enough.  I had a huge urge to go for a run afterwards but now I know that fitness isn’t about that. It’s all about the quality and trusting the programming from Tim and Jess.  I feel fitter and stronger now, both mentally and physically.

What’s your favourite thing about being a member at Saxon CrossFit?

There’s a few.  The feeling when I nail a lift I thought I couldn’t do, or when I actually manage to do more than 4 pull ups in a row.  The people, even Tim when he constantly rips the piss out of me for not being able to stand still for more than 2 seconds.
I also love the fact I can train with my sister and that we can do something that we enjoy together.

I like a good, long, horrendous EMOM, preferably one that involves some barbell, some running and some burpees…oh and I like a wall ball and a box jump. Oh and some lunging….anything that makes you want to cry but also makes you feel SUPER FANTASTIC afterwards.

What movement do you shed a little tear at during a WOD?

Rowing has to be my nemesis.  My technique is pretty poor and my legs are short so I don’t produce a lot of power.  Jess once referred to my rowing tekkers as ‘like watching a pixie on a rower’.    I think I’m slowly improving but lets just say it isn’t one of my strong points and a tiny part of my soul dies inside when I see it written on the board.
How would you describe Saxon CrossFit in 3 words?
Outside (your) Comfort Zone…..ok, ok, so I cheated and that isn’t 3 words but that’s quite a hard question.
Saxon has definitely pushed me outside my comfort zone since I’ve been a member. I’ve lifted heavy weights above my head with my skinny little spaghetti arms, I’ve competed in competitions and I get nervous butterflies in my tummy before WODs.  Being outside your comfort zone is good for you!

Tell us one thing about yourself the other members wont know?

I have a large array of stories and things that I should probably take to the grave with me, but I’m known for being a bit of an ‘over-sharer’ so you will all probably hear them soon…no doubt after a few too many vinos at the Xmas party.
My middle names are Cydney Maud.  I used to hate them when I was younger, as they aren’t the most girly names. I used to keep them a secret from all my friends, but I have grown to love them now.   I was named after my grandparents so they mean something to me….and they still give the majority of people I tell a good giggle!