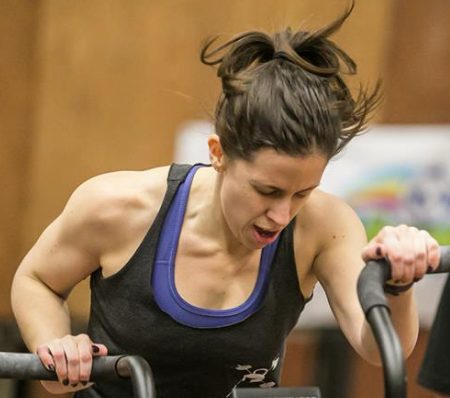 Heidi is our newest coach, and is proving a big hit. She joined an experienced team here at Saxon.

We asked Heidi to pen her CrossFit journey, telling us a little of how and why she became a CrossFit trainer.

I had heard of CrossFit about 7 or 8 years ago but it wasn’t until I moved to Wymondham in 2016 and my old gym felt too far away that I took the plunge and booked into a taster at Saxon. I have never felt so nervous about attending a gym class but it was the best decision I ever made, I have never looked back. I’m not going to lie, when I first walked in and saw a largely empty room with a big metal frame, it took everything I had not to turn around and run the other way!

From the very start, I was hooked on the aching muscles, that feeling you get when you finish a workout and you know you gave it your all. I love the amazing ability I think only CrossFit has; that no matter your age or ability, there’s always something new to learn and accomplish.

I was at Saxon about a year when (I can’t actually remember how it happened) I got roped into the Suffolk Games team comp with Liza, coach Sam (who was then just little sam) and Gav, a previous member, before he moved to the other side of the country. I turned up to Trinity Park in Ipswich that Saturday morning absolutely petrified and was so worried I would let the team down. We made it through all 4 workouts and it was the most exhilarating feeling. There was, as usual, a bus load of Saxons cheering us on. It was that day I realised, I can do this Crossfit stuff, yes it’s hard, yes it hurts but with all these amazing people inspiring me and cheering us on, this is something I always want to be a part of.

This gave me a thirst to push harder and try and make the Saxon Tribal Clash team. In 2019, I signed up for the trials and focused hard on my training. I couldn’t quite believe it when I managed to make the team! Frances, Steph, Aaron, Taps, Alex and I, all trundled to Bantham in Devon, again with a massive Saxon support crew.  We got down to the beach on the Friday evening for the athlete briefing and I had never felt so scared but alive in my life. We had an amazing weekend competing, i conquered several fears that weekend, including climbing a rope in front of 100’s of people! The thing that strikes me most and always stays with me is the continued love and support you get from the CrossFit community.

These experiences made me realise that I wanted to help other people experience some of what I had, achieving things they never dreamed possible. This is really what led me to then study for my level 1 and, here we are!

The whole reason I did my CrossFit qualification was because I love CrossFit and I am a massive people person;  I want to help others enjoy CrossFit  like I do. Most of us are normal individuals with busy jobs, families to care for and lives that keep us running around. We aren’t top tier athletes and equally have no desire to be; we just want to be a little fitter tomorrow than we were yesterday. Obviously, it’s always amazing to push people and see them change into athletes, but for me, it’s the people who have started from nothing and seeing them achieve that PB clean or use a heavier dumbbell than they believed they could, that’s what I love the most and that’s what I will always strive to be. That positive cheer leader, who truly understands how bloody hard some of this CrossFit stuff is!

I love Saxon and the community we have, it’s a special place and will always have a special place in my heart. If you ever need some motivation or encouragement to come to class, give me a nudge and I will help you along the way. But mostly  I just want to say thank you to Gary, Alex, Sam and Jord for letting me become one of the team, it’s an absolute pleasure.