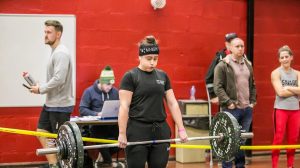 Last week our friends over at The Suffolk Games announced they were going to be running a same sex pairs event next year. Still buzzing from our efforts at their last event our community was quick to get involved. With only 36 team spots available (18 male and 18 female) we managed to get 9 teams repping Saxon! We can’t wait to get the Saxon army back on the road to Suffolk next year!

In this weeks blog post we hear from Coach Els with her thoughts and breakdown on the last Suffolk Games event – her first time competing in an external competition!

“It’s Sunday, its early and I am buzzing.

6:45am, our journey begins. Chris Booker, Frances Peters and myself are en route to Ipswich for the Suffolk Games Mixed Pairs competition. All of us have a mountain of kit and food for the day ahead and a bucket load of nerves in our bellies!

8am, we arrive at the venue for athlete registration. Unintentionally we arrive in a convoy with Heidi Mills, Sam Hunt, Bart Kosmalski and Toni Clancy. They are all as nervous as us but buzzing to be representing Saxon on the competition floor!

Most of us had given some serious thought and practice to this workout and we knew it would A) be spicy as fuck and B) would favour athletes who could sustain a high power output on the bike.

Tim and Frances confirmed our thoughts. Due to Tim’s weight, strength and ability to bury himself he can ramp up the airbike and tick up the calories in no time. Combined with Frances’ strength, technique and the fact she is short (minimal cycle time on the deadlifts) the destroyed the first workout!

In contrast Sam, who is obviously a lot lighter than Tim, found his world ended by the airbike in this workout!

The standout part for me on this WOD was the consistency in good form across all athletes from Saxon. Whilst moving at a high intensity it can be easy to let good form slip, especially performing a lift such as a deadlift. However, all of our athletes maintained near perfect form throughout.

11:00am and WOD 3 was starting consisting of 90 seconds  max repetitions with a 60 second rest between each of front squats, hang power cleans and STOH, sharply followed by another 60 seconds rest, then partners at the same time perform either max cals on the air bike or the rower.

Toni and Bart worked together really well in this, setting a dominant and consistent pace from the start. Toni took charge and cycled the barbell like there was no tomorrow and Bart following her pace like a boss. Their smooth technique was a clear advantage across the field.

It was great fun to see the aftermath of this workout as every single competitor got off their rowing machine or bike after the 60 seconds max effort calories. I remember telling my judge to just shout at me as hard as she could, then at the end I got off and laid on the floor next to the girl from the team nearby who had also just finished We didn’t know each other, and had never spoken before but we shared a look that said ‘I know and well done’. That’s CrossFit for you, you suffer together and you all relate to the pain you’re in no matter if you know each other or not. (It’s safe to say it was a close contest between Alex and Tim on who had the biggest pain face on after their time on the Air Bike.)

13:15pm and its Kick off for WOD 4, probably my favourite workout of the competition. This workout filled my stomach with fear and I was shaking with nerves. It was the workout I expected we should do well in, which only made me more nervous.

WOD 4 consisted of partner A performing 20-16-12 repetitions of a hang power snatch, whilst partner B performed 10-8-6 lengths of a D Ball carry (30/50kg) then it would swap and partner A would run with the D Ball, whilst partner B would perform their barbell movements. Each pair had 60kg (including the bar) to split between them, most teams opting for 25 for ladies and 35 for gents, with the exception of myself and Chris who went for a clean split of 30 and 30..adding the pressure just a tad.

This workout looked way worse than it was. In actual fact, it was over almost as soon as it began and was so much fun. Top tip though, make sure you remember to loosen your weightlifting belt before you try to run with a 30kg ball on your shoulder!!

4:00pm and the day is almost done. Tim and Frances have held the lead all day and are currently two points ahead of second place. A shit tonne of food has been consumed and we are all just running on adrenaline for the final workout.

By now we have a large support team going on. The largest by far! Saxons and their families have travelled down to watch us all compete and cheer us on! (I think most of them just wanted to see me and Tim suffer for once!)

Having a strong support crew makes all the difference and myself and all the athletes fucking loved having such a strong showing from Saxon! (Even my own step dad Paul Baines was inspired enough to join crossfit after watching!) The motivation and encouragement that we got that day was amazing and I personally, along with everyone else there competing, truly appreciated it.

I was blown away by our performances in this final, from Bart’s impeccable skipping skills and Toni’s rapid box step overs, Alex’s burning fight to the end and Lisa’s drive to keep him going when he tired, Tim’s frantic heave of the tyres and Frances dive out the way, Sam and Heidi’s awesome teamwork throughout (even if she was tired from carrying Sam through WOD one!) and Chris’ passion and smile throughout. It was a perfect last workout.

Once the dust had settled there was a tense moment whilst we waited for the leaderboard to be confirmed and as you all know the winners were Tim and Frances. As soon as we got there, I remember Tim looking round the room quietly and then looking at me and saying ‘Yep. Me and Frances are going to win this.’

As an athlete it was an awesome day competing! The workouts were hard but fun and the atmosphere was great!

As a coach it was amazing to see our athletes and our community doing so well! Seeing all our competitors moving well (a testament to our awesome coaching I guess!) and representing Saxon perfectly was epic. And to see the turn out from our support team was truly insane!

The absolute icing on the cake for me was, at the end of the day after the prizes had been handed out, seeing the majority of people grab their stuff and leave but seeing every Saxon, athlete or spectator, helping to tidy away, pack up the event organisers kit and thanking the events team for a truly great day.

We truly have an awesome community and I am incredibly proud to be part of it!”