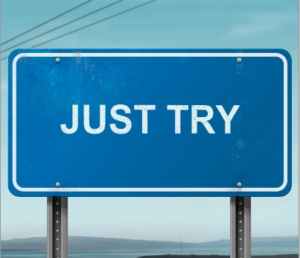 I bet you’re all going ‘Ah yes atychiphobia, that well known phobia all the cool kids are talking about’. No? Nah I’d never heard of it either but I think it’s something we all suffer from to a small degree. It is a fear of failure, an irrational and persistent fear of not achieving something. I bet most of us can relate in some degree to this. How often have we not tried something because we are scared we might fail. How many times have we made an excuse to stay within the realms of things we currently know because we don’t know what’s on the other side of trying except the risk of failure. I know I have.

But whats’s wrong with failing? Nothing really. Failing is just the world’s way of telling you you’re not ready for that yet, that you either need to adapt a little and work through it or you need to go and learn something new. Failing is just a lesson. James Dyson spent his life savings on the first 5126 prototypes of a bag less vacuum cleaner. That’s a lot of failing. The 5127 version went on to help James earn £3.6 billion as the head of the largest selling vacuum brand in the UK and US. All because he learn’t a lesson from each and every failure and then worked through it.

So why do we fear failure? There are many reasons but I believe the biggest one is because we care way way to much what other people think of us. If we don’t try at something then we can’t fail. If we don’t fail then we can’t be judged or seen as a failure. And that thought, that other people think we failed, is crippling. We all feel it. We’re ashamed to tell people we didn’t get that job we interviewed for, that that business idea we had didn’t pan out, that that weight we tried to lift beat us and that that guy/girl we hit on rejected us. Let’s face it in those examples there was no negative repercussions over than that we were scared people will think less of us for not achieving it. If you ignore what other people might think there are few reasons not to try anything. This is summed up nicely by the following extract from ‘Citizen in a Republic’, a speech by Theodore Roosevelt:

“It is not the critic who counts; not the man who points out how the strong man stumbles, or where the doer of deeds could have done them better. The credit belongs to the man who is actually in the arena, whose face is marred by dust and sweat and blood; who strives valiantly; who errs, who comes short again and again, because there is no effort without error and shortcoming; but who does actually strive to do the deeds; who knows great enthusiasms, the great devotions; who spends himself in a worthy cause; who at the best knows in the end the triumph of high achievement, and who at the worst, if he fails, at least fails while daring greatly, so that his place shall never be with those cold and timid souls who neither know victory nor defeat.”

So what does all this have to do with CrossFit?

How many of you have not tried something because you thought you’d fail. At least once a day I ask someone ‘Have you tried a pull up lately?’ I consistently receive ‘I can’t’ as the answer. But when did you last try and really try. I bet it was a long time ago and the only thing stopping you from trying again is the fear of still not being able to do it. Who gives a shit, one day you’ll try and succeed and it will feel amazing. At least a dozen people have told me they can’t do a pull up, I have ‘bullied’ them into trying again and they have achieved their first, a glorious moment in their life! All because they just tried. This can be applied to anything we do. Trying for that heavier lift, that handstand, that muscle up or that box jump.